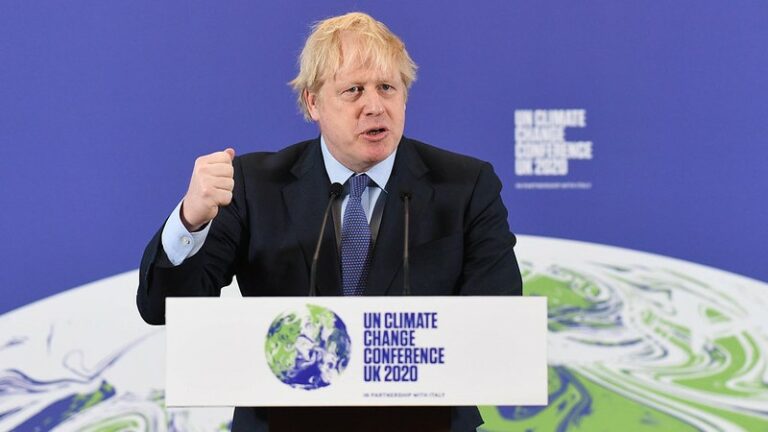 In the face of the severe economic depression and an ongoing third wave of the pandemic, Boris Johnson is becoming a surprise climate champion with his government’s second climate pledge ahead of the Climate Ambition Summit hosted by the UK. The UK has set a new climate target aiming for reducing greenhouse gas emissions by two-thirds in 2030. What does this mean for the nation’s battered economy, it’s allies around the world and most importantly, does it help?

Here is a brief insight into the government’s policy. Apart from the reduction of Carbon emissions by two-thirds as compared to the 1990 levels, the country wants to take back the leadership in tackling the problem while creating 250,000 green jobs. Dubbed as the green industrial revolution, the ten-point plan mobilises £12 Billion public funds towards advancing offshore wind, low carbon hydrogen, nuclear power, carbon capture and EVs while revamping air and sea transport, infrastructure and financing industries. And a major part of the plan is to avoid deforestation while increasing the forest cover in the country with the England Tree Strategy. After all, the most sustainable form of Carbon capture and Storage is by investing in forests.

To understand how this pledge affects the home population, we need to know who pays for it. According to the government white paper, the cost of decarbonisation will be paid for by households, businesses and taxpayers at equitable proportions. The government looks towards private investments to raise over £40 Billion in capital. The issue here is that private investments only come in when sustainable technology is financially viable to make a profit and returns to the investors. As funding for innovation is severely limited, industries look towards the government to use the taxpayers’ money for these sustainability initiatives.

The country is to be commended for taking these brave measures while its economy is barely floating in the choppy waters but is this enough to save the sinking islands? According to environment activists from the troubled regions in the world, these measures are not enough to stop the rising sea levels nor the frequent natural disasters. Reducing the Carbon emissions in the UK translates to Carbon leakage further upstream to the developing world where Carbon pledges are lax. It is imperative for the country to reform the mentality of consumerism which will affect the economy in a far more severe manner than say, investing in green energy. However, I am still cautiously optimistic as the new pledge has a shorter turnaround period (compared to the 2050 goal) and hence, means that significant efforts will be put in by the government.

What we can hope for is that this pledge may trigger a second wave of revised targets set by governments in light of a post-pandemic depression. We will need serious activism to push for further Carbon emission reductions by the wealthier nations in the near future. In the next week’s post, we will discuss the post-pandemic climate goals and a likely scenario where the developing economies are left behind in the push for climate reforms.