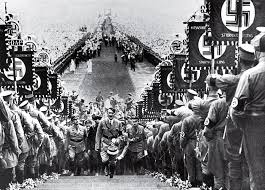 Watching a political rally unfold against the fascist face of India last night, I was neck-deep in thoughts on my drive back home. What is fascism? As the world turns fascist, is there a way out of it? I would love to find the answers and as the journey may take more than a week, you may find the next few articles based on this theme.

According to the political theorist Roger Griffin, fascism is an amalgam of totalitarianism and ultra-nationalism. However, he adds on an interesting element to the definition of fascism- palingenetic ultra-nationalism. What is it? There is a core myth to fascism and that is the concept of national rebirth. A country is fascist if the government claims it is taking it back to its glorious roots in the past ergo fascism appeals to emotion more than intellect.

The world is grappling with the ideology of fascism today. From the land down under to the land of the vikings, fascism has found its place in democracies and monarchies and everything in between. Trumpism is the most mainstream fascist movement today. The social media outcast still has a massive following as he targeted the emotions and it is hard to appeal to one’s intellect when he is fuelled by his emotions. Trump’s defeat is a blow to the ideology but all it takes is yet another populist firebrand politician who can rile up people.

In the European continent, the deeply Christian far right play with the same ideology. However, in the Middle East, fascism stems from extremist Muslims. ISIS is all about going back to the golden days of Islam back when the Muslim Caliphate stretched to the ends of the globe. In India, the Hinduthva ideology is reminiscing the ancient India and the pre-Mughal eras. Narendra Modi and his party has set its sight on sending India back to the “golden days”, by renaming cities and sacralised traditional Hindi instead of the Hindusthani language which is commonly spoken by Indians and Pakistanis.

Where is fascism currently standing? We can use the F-scale test designed by Theodor Adorno for a better understanding of the world of fascism. The test measures along the following dimensions:

The test has been heavily criticised for many shortcomings.. You can study further about Right wing authoritarianism which focuses on 1, 2 and 3 only. We will look at these tests and see where the world lies on the fascist scale next week.