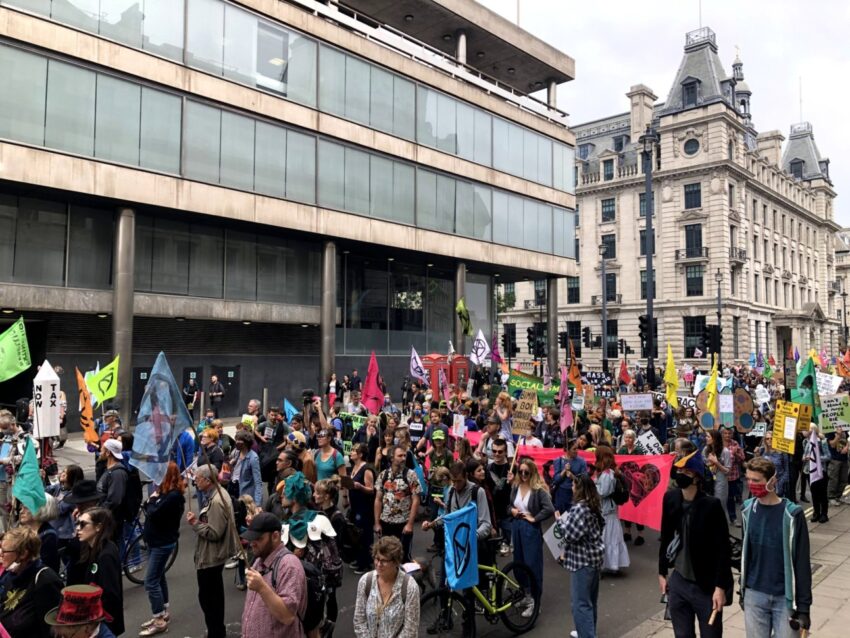 The countdown begins as we inch towards the end of the month of September. Tick tock. Time is ticking away and I cannot desert my blog for more than a month. Here is how I began my fall (autumn).

I rebelled. For the first time in my life, I actively took part in a march (with a cool banner that was gifted to me!) and met my fellow Muslim environmentalists who I have been meeting online every week for the past year or so. It felt like opening up the floodgates of activism, once I completed my march for nature on the final day of the September Rebellion, I then helped send off environmentalists walking on a two month long Camino to COP 26 and then hosted them at a mosque in Birmingham all in the span of 30 days. It was quite an intense month considering how our product launch loomed just over our foreheads at Reshift (exciting news this Monday!)

As I bask in the three hours before another month passes by, I would like to direct my key reflections on the rebellion, Islamic environmentalism and the dual role we play as climate warriors. What is Extinction Rebellion? It is a group of hard core environmentalists who want the world to direct all of its energy towards the climate crisis. Why? They want this planet to be liveable for their grand kids. That is a fair ask. How? They disrupt the people and the government in their daily routines to enlighten them on the importance of the devastating climate.

Depending on how you look at it, religions are either embedded in the very essence of nature or beautifully crafted around it. For a lot of people, spirituality is better found in the depths of nature than amidst the hustle and bustle of urban concrete jungles. Of course, industrialisation and urbanisations has helped us move away from the ‘discomforts’ of living too close to nature until we realised that the same discomforts are what we needed to escape the endless pursuit of money. I am not demonising the concept of money here, it is a brilliant idea and so is free market capitalism with its endless luxuries, but at the end of the day, they are just human ideas and die along with the human civilisation that follows them.

Islam has always stuck a conciliatory tone in everything that deals with the everyday life of a human being. From spending within your means to treating the people around you justly. Is environmentalism a bit too extreme for an ordinary Muslim? This might be a controversial take but I would like to compare it with the Islamic concept of acting against injustice. There is no pacifying in Islam when it comes to an injustice. It needs to be acted against using your hands, voiced out with your mouth or at the very least, despised by your heart. If the climate crisis is an injustice to the divine creations in nature and the fellow Muslim brothers and sisters in the overheating and sinking cities of the Global South, I believe that environmental activism falls perfectly in line with Islamic values. If you are interested, come join us!

Now that I have established my concept of faith-based environmentalism, it is time to practice what I preach. There are divided opinions among the environmentalist community about whether to go after the chicken or the egg, i.e., whether to spend the efforts of an environmentalist on bringing about policy changes or to campaign for individual lifestyle changes. Quite a few people would argue for policy changes as it is the chicken that lays the eggs. However, the chicken may peck you if it feels threatened or chicken away from radical policies. On the other hand, eggs take a long time to hatch and we don’t have the luxury of time in the climate fight.

I hope you found the analogy as fun as I did dreaming it up! Often, environmentalists are critiqued at a higher standard to the normal people, “Practise what you preach”, some people say. And I agree with them. From a study I completed on the lifestyles of a few environmentalists including myself earlier this month, I found out that I have the most Carbon intense lifestyle and it is time to bring it down. You can find out more about it at the Ethical Consumer Week virtual panel discussion on the 17th of October.

The end of this month also marks the completion of my third year here in England, a time to reflect on my journey thus far. These three years of my life -under mostly grey skies- helped me carve out the four cornerstones that define my aspirations- a Neotraditionalist Muslim, an Environmentalist, an Entrepreneur and a Nomad, all in one. We will talk about these in detail on a birthday post as I turn 26 *wink wink*.